On behalf of Anishnawbe Health Toronto and our Foundation, chi-miigwetch (big thank you) to Old’s Cool General Store and the East York Community for bringing the Orange Shirt campaign to Toronto to support healing and wellness for the Aboriginal community.  Many of our clients and their families are dealing with the ongoing trauma caused by Residential Schools. Guided by the teachings of traditional healers, elders and medicine people, we aim to build a healthy, strong Aboriginal community by looking at health holistically and helping people to overcome the challenges colonialism has brought to the community.

Orange Shirt Day is Canada’s annual day of commemoration to honour the lives of people who did and didn’t survive the legacy of residential schools. First Nations, local governments, schools and communities come together to mark the lives of First Nations people who were forced to endure that horror. The date for Orange Shirt day was chosen because it is the time of year in which children were taken from their homes to residential schools. For all the history on Orange Shirt Day:

The Orange Shirt Day creators have given their blessing to our initiative and are in full support.

At Old’s Cool we have been commemorating Orange Shirt Day annually. Last year in a few weeks we were able to raise close to $1000.00 for Anishnawbe Health Toronto (AHT), Toronto’s Indigenous Community Health Centre.

For nearly 35 years, AHT has placed Traditional Aboriginal Healing practices at the core of its healing work which has helped with the growth, care and resilience of the largest population of Indigenous people in Ontario.

When I met with Julie Cookson, the Executive Director of the Anishnawbe Health Foundation, to give her the cheque for the funds raised, she filled me in on the fundraising campaign to build a new home for AHT that will consolidate its three GTA clinics into a single, iconic Aboriginal structure.

The province has transferred a section of land on the site of the Pan Am and Parapan Am Games Athletes’ Village to AHT where a dynamic, world-class, architecturally beautiful Aboriginal community health and cultural centre will be built, including a Sweat lodge, ceremonial grounds and land for nature based healing programs. 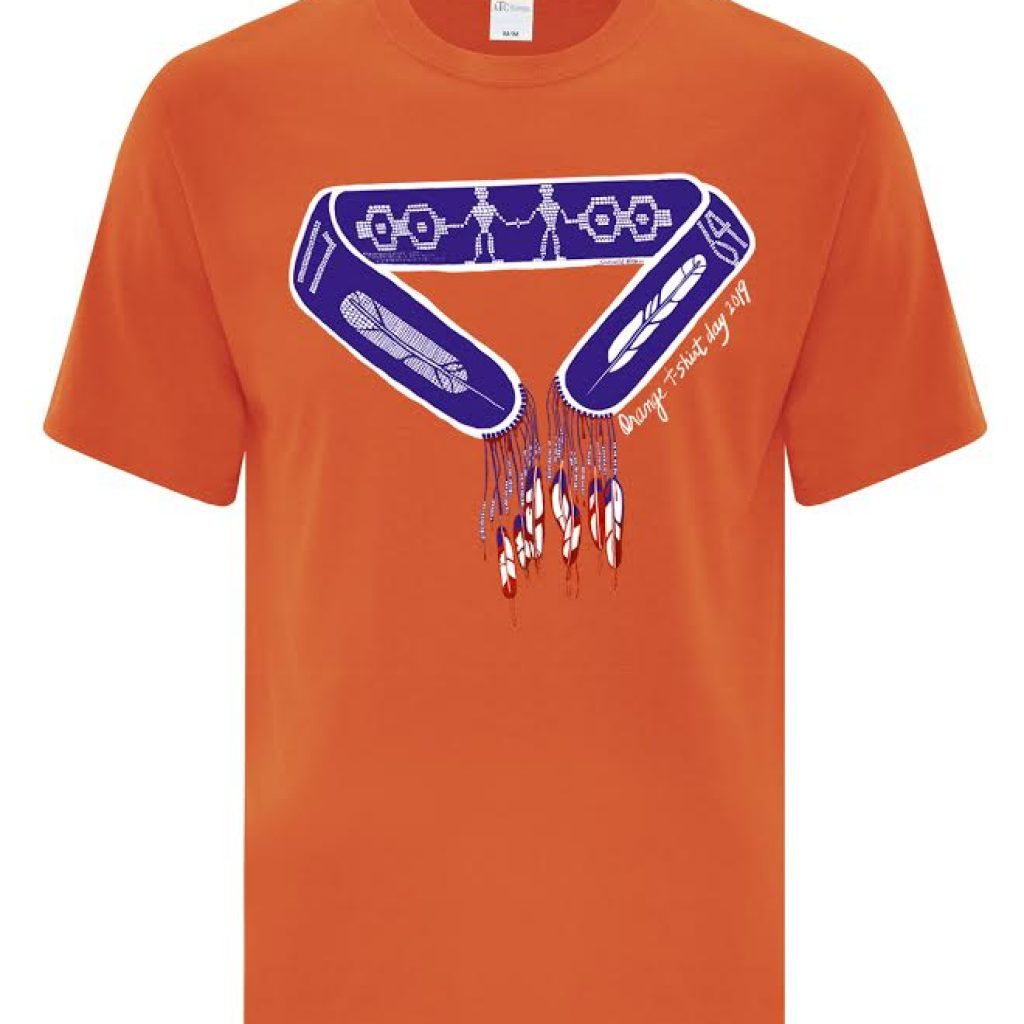 We hope to raise $25,000.00 for the new AHT building fundraising campaign over the next 5 years through our Orange Shirt Campaign.

We hope that this will be embraced by schools, local government, local community groups and other groups of people who want to be part of this initiative.

We need a champion at each school and institution to be the person to coordinate the promotion and education for their group. We will set up a meeting in April for all of the champions to meet and organize.

Let’s work to keep the discussion on all aspects of residential schools happening annually and to finally understand and come to terms with our past.

The Art and Education for this year’s T-shirt

We commissioned my friend and sister Kindhearted Woman, Ojibway Artist with roots in Dokis First Nation to create our design again this year. I worked with her and together we came up with a design that would tell an important story. We wanted the art to remind people of some of the historical context of the residential schools.

Wampum belts are sacred agreements that First Nations people used to confer authority and document laws of the land.

300 years ago as European settlers were rapidly coming to Canada and taking lands, First Nations Communities made an official and binding contract with the settlers. It is contained in three different Wampum Belts: The Two Row Wampum Belt, The Twenty Four Nations Wampum Belt and The British and Great Lakes Covenant Chain Confederacy Wampum Belt. These Three Wampum Belts are actually the first Constitutions of Canada.

In 1764 more than 2000 First Nations Chiefs met with European self-declared Canadian leaders and ratified the negotiations and the Wampum Belts. This was all documented in the Treaty of 1764 Wampum Belt. 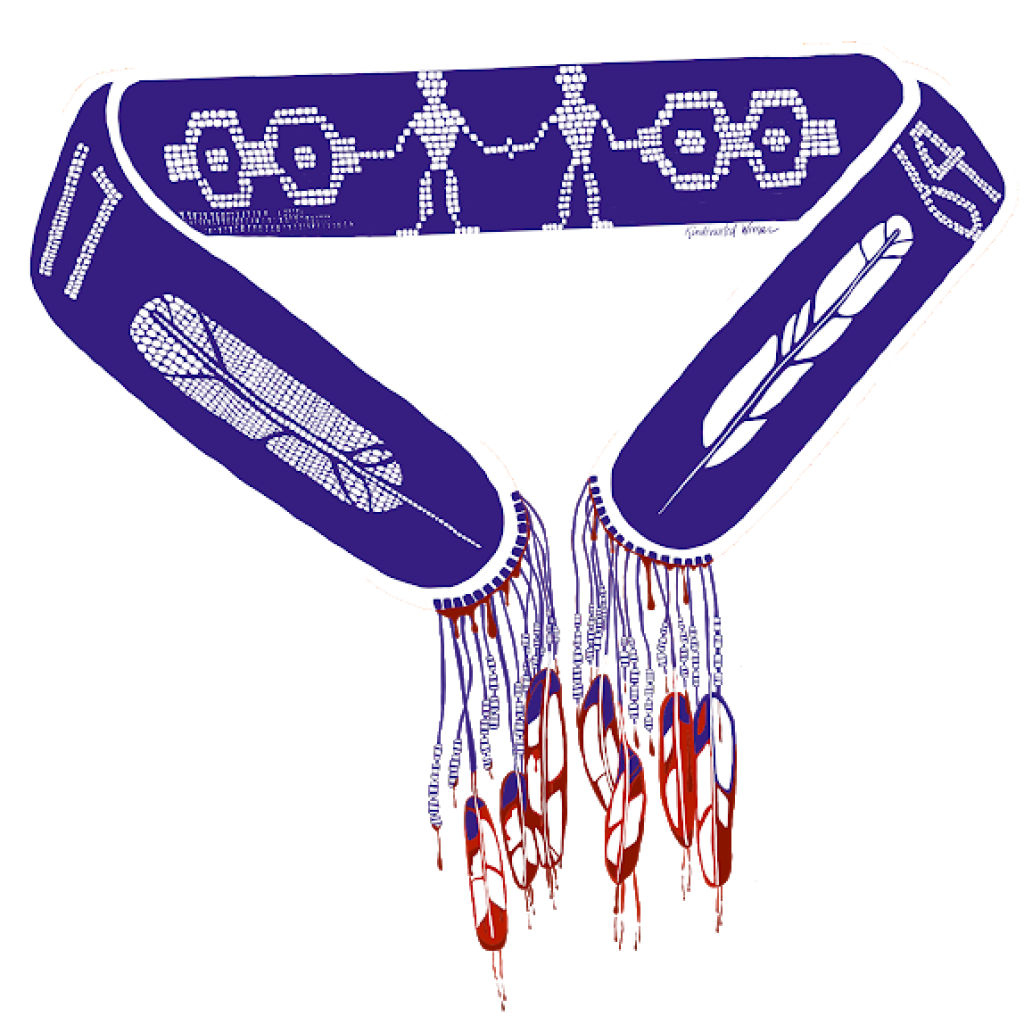 “The Two Row Wampum is about peace and friendship,” said Oren Lyons, Onondaga Nation Faithkeeper and a Two Row Wampum expert. “As long as the grass grows green, water flows downhill, and the sun rises in the east and sets in the west, the wampum belt has meaning. It’s an agreement—you stay in your ship; we stay in our canoe.”

The original constitutions were agreement that outlined an expectation of the First Peoples of Canada that the European People could settle without any obstacles by First Nations People BUT in turn Indigenous ways of living would not be disturbed or interfered with. The settlers promised and agreed to respect the self determination of Indigenous Communities and to not get in the way of their cultures or way of life. The settlers also agreed to treat First Nations People as Sovereign Independent Nations.

History has shown that the treaties were not respected by the European Settlers and later treaties, the Indian Act and Residential Schools were a flagrant and Inhumane disregard of the original agreements and discussions.

All of the promises were broken in the existence and execution of residential schools. Instead of staying in their ship European settlers spilt blood in the waters and on the original constitutional agreements ratified between all Nations in 1764.

This year’s artwork for our Orange Shirt represents the need and the hope that we can come together in the spirit of truth, reconciliation and return to the ideals of mutual respect between nations and cultures expressed in the Two-Row Wampum Belt.

If you are interested in partnering with us or being one of our champions, please email us at oldscoolgeneralstore@gmail.com.

We will be hosting a meeting for all partners on Tuesday, April 30th, we will reach out to you by email to give you the details so please email us with your interest in helping.

Anyone can partner with us: parents who want to make sure this rolls out at their school, local Bia’s, politicians, teachers, community groups and even individuals who want to help get the word out.

T-shirts ordered in the amount of 30 or more t-shirts at a time will get a $100.00 discount if requested.

Please order your T-shirts by the end of this school year so that we can have them to you well before September. We can do any kids size or adult size.

If you would like to sponsor a school buy purchasing tshirts for kids that need that support, we would be happy to create those partnerships.

To order your t-shirt you can:

Send us a message, and we'll get back to you as soon as we can. Thanks!